Get me outta here!

I had extra time to spare over the winter break and decided to use my time effectively. Inspired by my brother’s official Android application, I decided to try and create my own iOS application using Xcode. I watched a few videos on it, which I later realized significantly trivialized the task. I quickly realized that all of the programming in X-Code required a previous knowledge of Objective C, which was a foreign language to me. In an attempt to keep my project going, I began borrowing books from my local library, trying to learn the basics of Objective C. With the help of this as well as a Stanford course through iTunes University, I was able to a create simple application and understand the code behind it. In the future, after taking some sort of iOS application development course, I hope to further my application and change the design of it.

Here is what the interface of Xcode looked like. It was very different from interfaces I have seen before, but I eventually became accustomed to it. As you can see on the left side, the Stanford course helped me create several classes that I integrated together in order to build this app.

Here is what the app looks like when the program is first run:

After clicking two cards with either the same sign or number, the score increases.

Here, I clicked a new card.

I then clicked a different card which did not have the same number or sign, so I lose points.

This is just the basics of an app that I hope to create in the future. Hopefully, my actual application will have flashcards that can help students study.

During the past three weeks, I have been taking a computer simulations class at Stanford. My instructor is Sherol Chen, who is an amazing teacher who really made me understand the topics. She gave us this idea of creating a blog, which is very important for the future. I am very grateful for her time and effort put into making our experience as great as it could be, I’ve had a blast!

Julie and Peter were my RAs for this course and helped me with anything I needed help with. They were so friendly and very intelligent.

It’s been a great three weeks, and most of it is because of Sherol, Julie, and Peter. Thank you so much!!

Yesterday, Bret Victor came and gave us a lecture. He is very accomplished, having won the Apple Design Award and created several games. He showed us how he created his own IDE and programming language in which the compiled result and language can be seen at the same time. I wanted to say that I thank him so much, as that was an amazing talk that I will not forget! You can look at his website here-

For my final project, I created an ice cream catching game with two other teammates. The idea is to follow the pattern stated and catch a certain pattern of scoop colors. Once the player reaches 10 scoops, he gets a point and then starts over. We used Processing. Here is a playable link- 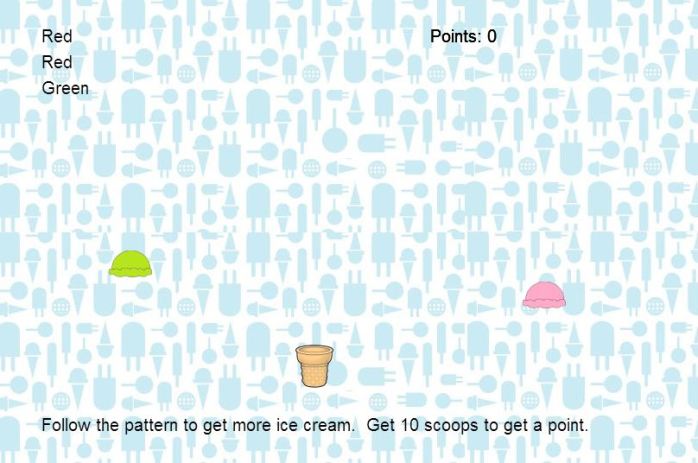 Yesterday, I created a simulation that begins with a white screen and then gradually forms a picture using ellipses. I used an application called Processing. The programming felt relatively simple. I used a get color function which retrieved the color of each pixel and then printed it out on the white screen. 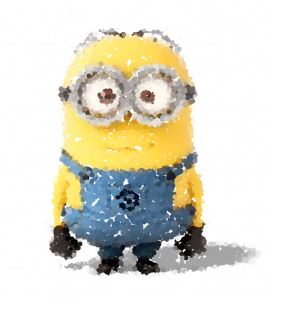 Today, I read an article about a new programming language called “D.” It was formed by two individuals who were both interested in creating a new language. Now, Facebook is tweaking and improving it in order to make it more usable. The article often referenced the combining of two worlds of programming: speedy and simple. Before, high-speed languages used to be very complicated. Now, with D, this does not have to happen.

Here is the article-

On Friday, I had my first experience with Arduino. Basically, we were given an Arduino kit, which had the chip and wires. With help from the instruction booklet, I began programming different methods on the Arduino. First, I made a blinking light. This was relatively simple and only involved a couple wires. Then, I made a light that blinked several different colors. Finally, I made a row of lights shine and different times with different colors. Unfortunately, I did not have enough time to utilize the sound feature, but I am sure that I will do this at home, as we are allowed to keep the Arduinos.

In this project, I placed an image of a world map on to Processing.js. Then, I used objects and a class to place ellipses in the location in which every student in our class lives. Basically, the idea was to have a character that travels to everyone’s home city. The red dots represent each city necessary to travel.

Prototype: My prototype for my final project proposal is simple game. In this game, there is 1 ice cream cone at the bottom of the screen while several different colored scoops are falling down. The cone can only catch certain colors of scoops and develop an Ice Cream Sunday of one flavor, otherwise the user loses.

What People Will Learn: People will improve their hand eye coordination and reflexes.

Interactive/Observing: This game will be interactive where users will utilize the left and right arrow keys in order to play.

Fitting in the Exploratorium: This game would fit into the Exploratorium as a fun game that kids can play with their friends to see who would get the highest score. Yesterday, when I visited the Exploratorium, I played a large multiplayer Pacman game which inspired me to create this game. Unfortunately, I was unable to take pictures of the Pacman game, but there are several pictures available online. Here is what it looked like- 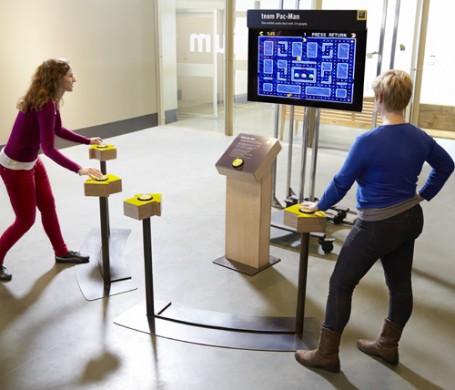 Similar Systems: This fruit game is very similar. The user has to move the baskets around and catch the different fruit. My game is pretty much the same thing, except the cone has to catch only certain colored ice cream falling down. The game is an iPhone Application and not available online.

Color Theory- I am very interested in this topic because I think it would be an interesting way to learn about color usage in programming. I would make a program that makes design with color easier and offers different options.

Game Design- This project would be a fun way to design games and build them. This topic is appealing to me because I think it would be a great experience to build a game and be able to play it.

Draw/Game Loop- I think that this is using a loop to make a game or drawing. This would also be very cool because I would make a final product that I could play and utilize.